I have only watched James Dean in Giant three times. It is a comparatively small number of times when I think of how much time I have spent gazing adoringly at him in Rebel Without a Cause and East of Eden. In my youth, I thought the latter films were better just by virtue of the fact that there was more total screen time devoted to Dean. But I was wrong. Giant is incredible and Dean is incredible in it. We see him as the outsider (naturally), looking in at all the things he craves that are just out of reach: love, money, respect, adulation, and, of course, Elizabeth Taylor. That longing, that intense loneliness is not only evident through blocking, or where Dean is placed within a scene, but through his body. He staggers under the emotional weight of his isolation and despair. The emotional pain is made physical through and informs his every movement, simple tasks become jarring and strenuous, difficult to watch. He is almost incapacitated by his longing. It is an incredibly tender and evocative physicality. A stunning testament to an actor whose beauty often overshadows his immense talent. This physicality is no doubt present in his other films, but it reaches its apex in Giant. The characterization of Jett Rink hangs on this exploration. He has dialogue, of course, but the audience only really understands his misery through his body. Through the time he devotes to his movement and thus to the interiority of the character, Jett is rendered vulnerable to such a degree that it is nearly painful to watch him. I say nearly because it is actually captivating. It creates a depth and an implicit understanding with the viewer that no amount of expertly crafted dialogue could have accomplished. Even when Rink exposes himself to be the closest thing to a villain that the movie has, we remember the depths of his sorrow and, while it doesn’t justify his behaviors, it explains them. Dean’s last scene in the film is a dedication party for his new hotel. Everyone has left the party early after a drunken brawl between Dean and Rock Hudson. Dean stumbles to the podium. We see that after acquiring all of the wealth and the adulation of a community, all of the things that were supposed to give his life value, he has found himself in exactly the same place as he was when he was a despised ranch-hand working on Reata (Hudson’s ranch). All of his acquired bravado has failed him. He is raw. He stumbles up to the banquet table, sits in despair, his hands searching his face for a temporary solace. He stands and begins to address a crowd that is not there, mumbling both incoherent and belligerent. As his final act, he leans into the table and it comes crashing down on him. He is undeniably and unutterably alone. It is a moving, deeply tragic scene. While the film was being edited, Dean died in the infamous car accident and this scene, found in editing to be inaudible, was overdubbed by another actor. I find this an interesting anecdote with which to end a discussion of Dean’s work on Giant. The voice, arguably not his own, isn’t a memorable aspect of his performance. It and the dialogue has become superfluous. What makes the impact is his body, the way he uses it to convey the darkness and agony of his character. It is the most impactful thing about Jett. In the nearly three and a half hours of epic vistas and grandeur, it is the thing that stays with us because it is the one thing that rings true. 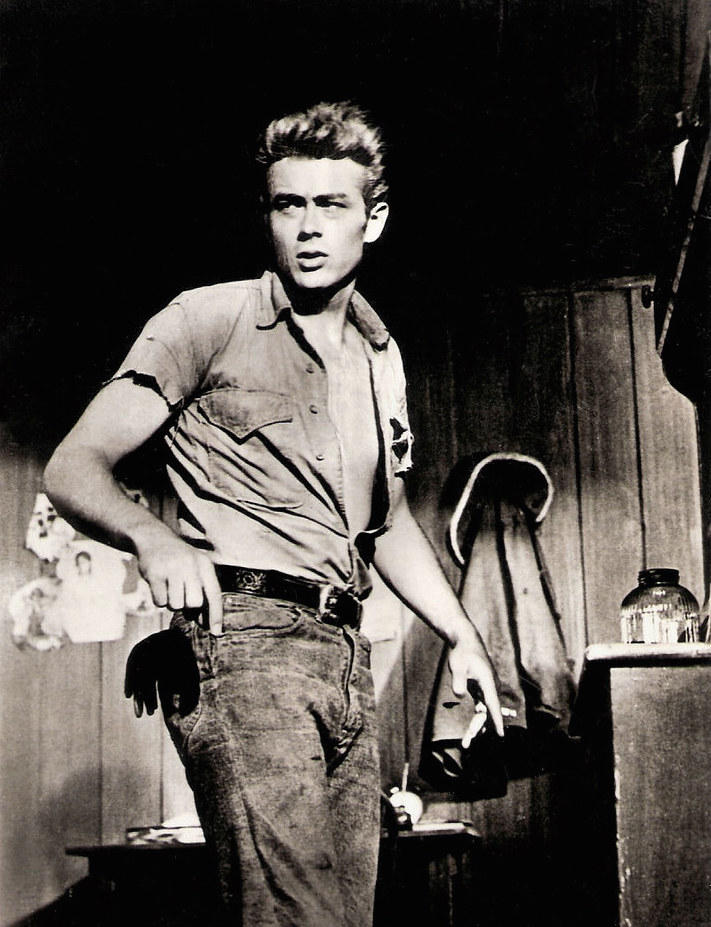 One thought on “On James Dean”