A film that begins as a daydream and ends like a nightmare, The Swimmer (1968) is a frank assessment of the vacuity of affluent life and the emotional repercussions of just such a life. It begins as an idealistic reverie and slowly, so minutely it may at first escape notice, it begins to descend into a tormented and claustrophobic reality. Written and directed by husband and wife, Eleanor and Frank Perry, The Swimmer chronicles the afternoon a seemingly untroubled Ned Merrill, played by Burt Lancaster, decides to swim home through the pools of his affluent Connecticut suburb, which he names the Lucinda River after his wife. What begins as an adventurous lark that seems to differentiate Merrill from a mass of dull and indistinguishable neighbors, begins to seem like a hazardous test that is tearing at the very fabric of Merrill’s reality as well as his mental and physical well-being.

At the beginning of the film, Ned seems resplendent and joyful, constantly remarking on the beauty of nature and his surroundings. He is a person apart from the monotony and tedium of suburban life. He comments on the sky, he runs races against horses, and vaults over fences. Everything he does is a physical manifestation of an unbridled joy and possibility. The people around him never seem to understand him, but he doesn’t care, and neither do we. Their materialism and lack of insight render them insignificant. Their identities are so wrapped up in the things they have that they fail to notice the wonder of the world. But Merrill is different and that’s what makes him so wonderful. But ever so slowly we begin to get a glimpse of his life as the insinuations of a recent disaster become more frequent and harder for us, the audience, and Merrill to ignore. Everything is not as rosy as Merrill believes it is and, we realize, the lack of understanding that the neighbors have for him is as much a function of his own self-absorption as it is of their myopic view of the world. But, those few moments before we realize this are glorious, they are freeing, and they make Merrill’s inevitable downfall all the more painful.

In this spontaneous adventure, one gets the feeling that Merrill is striving to retrieve something that has been lost. Some sense of wonder or awe, perhaps? A joyfulness in looking at the world around him? An appreciation for all the minutiae that makes up an existence? These all seem like possibilities in the beginning, but as we travel alongside Merrill, we realize that it is more personal than that, something a little darker and more complex. As he traverses the river of swimming pools, Merrill is confronted with the reality of his life; financial and legal troubles, the disdain his daughters have for him, a crumbling marriage. He is attempting to retreat into a wondrous world, idealistic, nostalgic, and beautiful, one where his family hadn’t yet been torn apart, one where he still has a beautiful home and all the trappings of success. This is where he wants to live, but the world, in its unrelenting coldness and reality, will not let him stay there. His home, and the past, is not something that he can return to. And so, as the film ends, Merrill is crouched on the front stoop, unable to enter the locked home. It is clear the house has been unoccupied for some time. The more reality encroaches, the more Merrill’s body weakens, until he and the house are in a similar state of disrepair. As the credits roll, Merrill braces himself against the front stoop, sobbing as the wind whips rain onto his face and body.

The tagline of the film, “When you talk about ‘The Swimmer’ will you talk about yourself?”, trite and Carver-esque as it is, seems apt. What the film is and where its power lies is in the recognition of the fragility of human existence. You can live in the fantasy world of the past, a world of your own creation. You can block out the present in favor of this idealized past, the way Ned Merrill does, but, inevitably, the past will come back, rushing over you no matter how hard you try to keep it at bay. 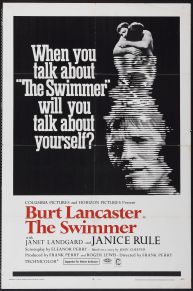