We first meet Hazel Woodus, played by Jennifer Jones, among the rolling hills of the English countryside. She is a force among the elements. A proto-Kate Bush or a Catherine Earnshaw, wild and desperate, running along the moors. She is one in a lineage of literary women who find solace in the land, a woman for whom the landscape has become a symbol of her passion and inner turmoil. Hazel lives with the spirits of these women, whom society has doomed and nature has rescued. Her very soul is as wild as the country in which she resides. Hazel derives her power and conviction from the earth around her, from it’s beauty, superstition, and folklore. Her eyes sparkle with defiance. They are filled with dreams of the land, they hold her hatred of society, riches, and convention; the things that hurt her beloved land, her beloved animals. When we first see her, she is barefoot, her clothes are tattered, and her hair is windswept and tangled. We hear the sounds of a hunt and are shown various animals running to hide as their world quickly descends into hell. Hazel runs determinedly along the steep and craggy hills. She has rescued a fox who becomes her constant companion. We have been shown the thing that differentiates Hazel from the rest of the community. We have been shown the ways in which humans have forced nature to yield to their own wasteful enthusiasms, but Hazel is here to preserve and treasure what she can.

The central struggles of Gone to Earth, released in 1950, are the dichotomies of nature and civilization, of society and wilderness, of the superficial and the essential. Time and again, Hazel finds herself up against the strictures of society and, noting their cruelty, she refuses to participate in them. She follows her intuition, she follows beauty, and, while the community whispers about her follies and derides her wantonness, the men find her captivating. And here, again, we are met with the “civilizing” influences; the men who attempt to tame her, who mention beating her into submission, who attempt to give her religion or beautiful dresses, as if taming her were a form of love, as if altering her appearance and her conception of the world were love, as if slowly drawing her away from the land, the thing that has formed her and fed her, was love. She is a woman who derives power from nature, from superstition, from Foxy, her feral counterpart. These men, in attempting to separate her from this power, effectively kill her.

Made in England by Michael Powell and Emeric Pressburger, the film’s lush and menacing depictions of nature, with oversaturated and beautiful color, make for a particularly evocative film. It is with their direction that the land and Jones begin to fuse. They are growing out of one another. She is among the broken and rattling trees, among the steep rocks and hills, she becomes a part of them so completely, she is the landscape. In less imaginative hands, the depiction of this connection would most certainly have fallen short.

Gone to Earth is the story of Hazel as she moves through the world, from her father’s house to her marriage with the minister to her brief adultery with a country squire. It is the story of a small town, with all it’s manufactured intrigue and gossip. It is the story of nature and desire and nineteenth century mores. It is the story of abandon. Hazel is a woman who doesn’t quite fit into this world or into this time. She is a woman of conviction, whose every belief and superstition is played out, even to her detriment. Hazel feels at times like a clarion call for the untamed woman. She is unburdened by society’s conventions, preferring the fierce, unsteady, and darkly beautiful land. She feels deeply, her acknowledgement of her own interiority, derided by the community, gives her strength, as does their derision. It is once she tries to leave this behind, that the trouble begins, because, ultimately, she belongs to the earth and the earth, the film appears to say, cannot be controlled. 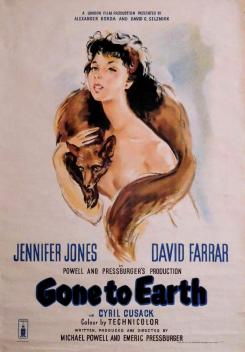